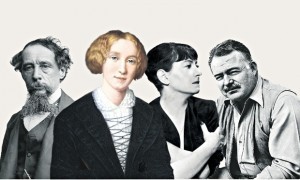 Did you know that some of the greatest men in history were not only authors or journalists, but also people who created neologisms and words we use everyday?

Well, you may think it is part of their job but there are many words you would be surprised to learn, are not as modern as you would think.

Here are just a few examples:

This word comes from the Charles Dicken’s 1836 The Pickwick Paper novel: “At every bad attempt at a catch, and every failure to stop the ball, he launched his personal displeasure at the head of the devoted individual in such denunciations as ‘Ah, ah!—stupid’—’Now, butter-fingers’—’Muff’— ‘Humbug’—and so forth.” Today it is used to name a person who does not have dexterity.

It is no one else than our dear creative author Caroll Lewis who invented ‘chortle’ by blending the words ‘chuckle’ and ‘snort’. We can find the origin of this word in Through the looking-glass novel: “‘O frabjous day! Callooh! Callay!’ He chortled in his joy.”

To summarise, a meme is a trend brought through the Internet and that influences everyone. Actually, you know lot of them like Nyan Cat, Grumpy Cat and Troll Face. However did you know that this term dates back to 1976 when Richard Dawkins explained the concept as: “represents ideas, behaviours or styles that spread from person to person. It can be a trendy dance, a viral video, a new fashion, a technological tool or a catchphrase. Like viruses, memes arise, spread, mutate and die.”

Did you know that there was no noun to name a person who goes on foot, until 1791 when William Wordsworth (what a coincidence!) found the word.

This word was invented by the famous British poet William Shakespeare to indicate something which is deemed ugly or unattractive. We can read it in The Taming Of The Shrew: “Doff this habit, shame to your estate, an eyesore to our solemn festival!”

Everything has its origin and sometimes you can be surprised as to how old they really are! Do you know any others which has an interesting origin?

Returning to the Office: A Pawsome Work-life Balance

We are here to help our customers communicate across the globe

For the latest news, updates and insights, sign up to our newsletter and stay informed!